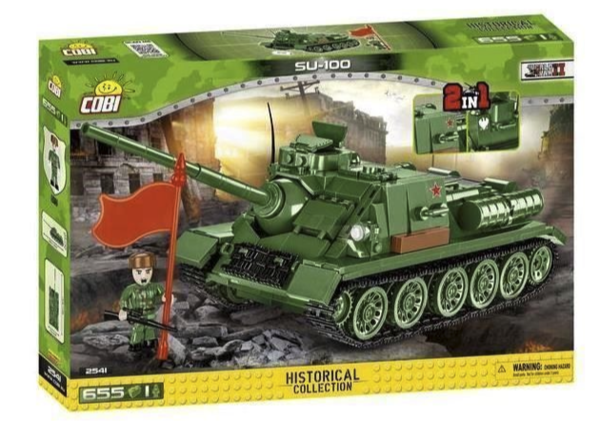 The SU-100 was a Soviet SPG commissioned in 1944. The genesis of this model involved the need to strengthen self-propelled artillery at the end of the war. The newly constructed D10 - 100 mm cannon was mounted on the slightly modified hull of the popular SU-85. In the period 1944-46, about 4,500 units of this vehicle were produced. The SPG was very popular, serving in dozens of armies around the world. Several countries still keep the SU-100 on standby. The SU-100 SPG model is entirely designed with COBI building blocks. The inclusion of many awesome pad prints has enabled the vehicle to be faithfully reproduced. The set does not contain stickers at all, only prints! And the prints do not scratch or smear even during heavy use. The model is equipped with efficient crawler traction, a movable gun and openable hatch.

Under the service flap there is a detailed motor. The set includes blocks with Soviet and Polish markings to choose from, another innovative and fun feature COBI brings to the set. The set is complemented by a figure of a soldier with a Mosin rifle, a cap and a red banner. The easy-to-read manual contains a list of blocks and statistics that you can use in the free COBI Historical Battle Game. This COBI kit is ideal for the construction of dioramas reproducing the Eastern Front. The SU-100 is the perfect gift idea for anyone of any age and a great start to your COBI construction set adventure.

655 high-quality components Made in the EU by a company with more than 20 years of tradition The pads meet safety standards for children's products Fully compatible with other brands of building blocks Blocks with prints do not smear or scratch and do not fade during play or under the influence of temperature Clear and intuitive manual based on drawings and icons and step-by-step directions Soldier figure with a banner Brick with model name pad printed The manual contains a card with vehicle statistics for the Historical Battle Game Model dimensions (length x width x height): 32 cm (12.6") x 8.5 cm (3.34") x 11cm (4.33")